Paul Sculfor, was spotted in Los Angeles, was willing to talk about his relationship with Jennifer Aniston. 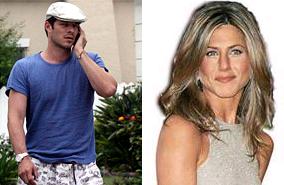 There is a speculation that during his split with the actress, he fled to England to get away. He dismissed the rumors by saying the rumor is “not true”

Paul Sculfor, who was munching on delicious desserts at a Pinkberry frozen yogurt store in Studio City, California with Mike Tyson, revealed, “I was in London for a modeling shoot with [clothing line] Next.”

He was also spotted with Clare Staples and another brunette beauty. A source, who is close to Paul Sculfor, revealed, “They’re just good friends.”

When the British model was asked about his trip to England, he said, “It went very well.”
As for other details with his relationship with the actress, he confessed, “that’s something I’d rather not talk about.” His friend has revealed that the couple has split but “they’re still very close.”