Prince Harry drunkenly kissed a girl in a Canadian nightclub, it has been claimed. The 22-year-old prince, who is currently stationed at Alberta’s British Army Training Unit, reportedly enjoyed a wild night of partying at Calgary’s Cowboy Club on June 6. 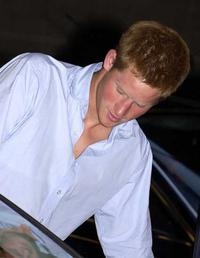 The prince is alleged to have flirted with barmaid Cherie Cymbalisty, asking, “Are you wearing any underwear?” The barmaid claims Harry kissed and cuddled her as he drank rum, sambuca and beer and failed to mention his girlfriend Chelsy Davy.

She revealed, “He was obsessed about my outfit and my bra top. He was very forward. He asked if my top came in different colors and wanted me to change into a different one right there. She added, “Then he told me, ‘Your skirt is really short’ and asked if I was wearing underwear. At the end of the night he asked for my number. Then he leaned in and we kissed on both cheeks and on the lips. His lips were very soft. He certainly didn’t mention anything about having a girlfriend.”

She said, “We definitely made a connection. He sent me a message saying he had missed me. And I have told him I would love to go on a dinner date.”

Prince Harry, who is reportedly set to embark on a secret Afghanistan mission, is currently in Canada for additional training on armored vehicles.