Prince William and Kate Middleton appeared relaxed and excited by thoughts of their newly-announced engagement in July cover of Vanity Fair. 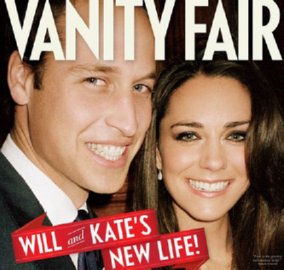 The never-before seen photograph graces the cover of the magazine. The issue will also revealed the story on the newlywed’s house-hunting and who does the chores around their Anglesey home especially taking out the garbage. It also describes the pair’s giggles on watching their nuptials back on television, and recounts the moment Michael Middleton realized the relationship was serious after Prince William arrived at his Berkshire home by helicopter.