Prince William was involved in a £40million cocaine bust during his first week of operations with the Royal Navy in the West Indies. 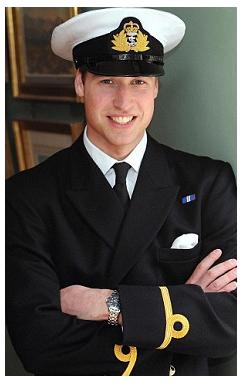 The 26-year-old prince helped locate and monitor smugglers from a Lynx helicopter – then watched as 45 bales of the drug, weighing just under a ton, were seized from the sinking speedboat off Barbados.

The young royal, who was known as Sub-Lieutenant Wales, worked to bring the haul on board HMS Iron Duke. [Prince] William is on a month-long posting with the frigate, which conducted the joint operation with the U.S. Coast Guard on Saturday.

His secondment to the Navy is aimed at preparing him for his future role as head of the Armed Forces.

And from the start, naval chiefs made it clear that they wanted him to take an active role in all the warship’s operations.

The drugs were thought to have been en route to Europe or West Africa, although the exact position of the vessel cannot be revealed for security reasons.

Sources on the Iron Duke said they were immediately suspicious when they saw such a small vessel far out to sea.

The 50ft power boat, which was a type commonly referred to as a ‘go-fast,’ was instructed to surrender.

The Lynx crew, which included [Prince] William, the pilot, a flight commander operating the radar, two Royal Marine snipers and a representative from the U.S. Coast Guard, hovered 100ft up in gusty winds, as a boarding party approached.

The group of young sailors battled for 14 hours in rough seas – often in darkness – to enable coastguards to seize the speedboat and its cargo.

Five men on board were also arrested. The aircraft then landed and William worked alongside a U.S. Coast Guard detachment onboard the frigate, who transferred the stash to the Iron Duke.

The speedboat which was in poor condition, was sinking as the raid took place. On the frigate’s bridge yesterday, Commander Mark Newland revealed, “This was a very challenging operation that unfolded over three days.”

He put paid to suggestions that William was enjoying a ‘jolly’ in the Caribbean, saying: “Sub-Lt Wales was an integral part of the team and as an Army officer trained in surveillance, added real value to it.”

This was a major operation – we don’t take people along for joy rides. The conditions out here are pretty unstable, it’s the start of the hurricane season and it’s been raining heavily with gusts of winds at up to 40 knots. Believe me, it’s not the Channel.

‘That said, Sub-Lt Wales has proved to be a very good sailor with no hint of sea-sickness yet.

The exercise will go some way to restoring the Prince’s reputation after he was criticised for using an RAF helicopter for ‘jaunts’ – including flying to his cousin’s stag party on the Isle of Wight – which cost the taxpayer £50,000.

The trips had been justified as essential training exercises.

As the North Atlantic Patrol vessel, HMS Iron Duke’s primary role is to provide a presence in the region reassuring and supporting UK Overseas Territories and offering assistance in the event of a natural disaster.

It is also working with the U.S. Coast Guard to restrict the flow of cocaine from Central America.