Queen Elizabeth II was spotted while she was looking at one of her vast estates for Princess Beatrice’s missing Norfolk terrier. 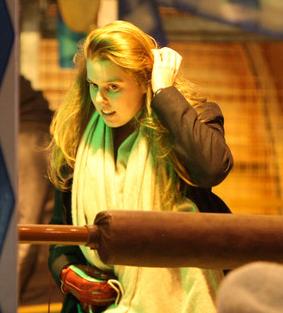 Tearful Bea, 20, who had a picture of him on a handbag, has been hunting for her pet ever since.

She drew up “missing” posters asking for the public’s help and called in her royal protection police.

He is not wearing a collar but is micro-chipped. He is missing his lower front teeth.

If you have seen him or have any information, please contact the following number.

When the Queen heard Max had vanished she was determined to join in.

She donned her winter clothes and spent hours out looking for him.

Her Majesty also ordered her gamekeepers and gardeners to scour the 5,000-acre park.

A royal source revealed last night: “Max is part of the family. He was given to Beatrice for Christmas when she was only 13.”

Meanwhile, Princess Beatrice and her mother were spotted enjoying some family time together at Winter Wonderland. Sarah Ferguson has a slip on one of the rides and falls over much to Princess Beatrice’s amusement and later flashes the royal knickers.