One of the stars of Bravo’s television series “Real Housewives of New Jersey” went to court Wednesday to avoid getting a little more exposure than she wanted. 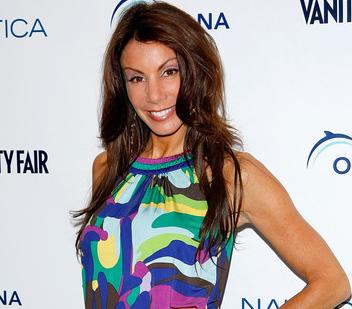 A judge granted Danielle Staub’s request for a temporary restraining order to stop her former boyfriend Stephen Zalewski from releasing a sexually explicit videotape and images of her.

State Superior Court Judge Thomas F. Brogan also ordered Zalewski to produce all copies of the video and pictures of Staub, and he set a hearing for July 21.

Staub, 46, also filed a lawsuit against Zalewski seeking damages for invasion of privacy, defamation and infliction of emotional distress. She claimed she was unaware Zalewski was taping her and only found out about it when someone read her a Star magazine article in which Zalewski discussed the tape.

“It sickened me,” Staub told the judge during the brief hearing.

Zalewski didn’t appear in court, and a telephone message left Wednesday at his home in Lincoln Park, in northern New Jersey, wasn’t immediately returned. It was unknown if he had retained a lawyer.

Outside court, Staub said Zalewski was trying to get back at her and her two daughters, ages 11 and 15, for her breaking up with him. She said the couple dated from May 2008 to December 2008 and Zalewski appeared briefly on “Real Housewives,” which is described on Bravo’s Web site as following “five of the most affluent Jersey Girls as they live lavish lifestyles and deal with all the drama that money can buy.”

“This is about my kids,” Staub said. “I’m a big girl. Do what you want to me. But you broke bread with my children. Don’t do this to me. No adult should ever do this to a child.”

According to the suit filed by attorney Darren Del Sardo, Zalewski told Star magazine he was considering selling the videotape and images and said, “She cost me so much money, why shouldn’t I make a few dollars?”

Del Sardo said the judge told him he would refer the case to the county prosecutor’s office since videotaping someone involved in sexual activity without that person’s consent is prohibited under state law.

Staub is one of five New Jersey women on the Bravo series, which premiered in May. Her bio on the show’s Web site describes her as a newly single mother “whose history of celebrity hook-ups is one for the record books.”

“Known for being brutally honest,” the bio says, “Danielle enjoys pushing people’s buttons and doesn’t apologize for it.”

Outside the courthouse, passers-by called greetings to Staub, and a small crowd gathered around her to take pictures with cell phones.

“I like her. I like the fact that she’s outspoken,” said Cassandra Jordan, of Paterson, a devoted “Housewives” watcher.

Her daughter, Brenda Jordan, had some words for Zalewski: “I think he just needs to find something better to do with himself,” she said.