Cate Blanchett has reprised her role as the 16th century monarch in “The Golden Era” that is a sequel to the 1998 film “Elizabeth”. 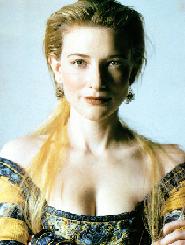 At one point in the movie, the actress is completely n@ked.

According to British journalists, who had a sneak peak of footage from the movie, Cate Blanchett is said to make “one sexy monarch.”

In the film “Little Fish Kate”, Cate Blanchett had a body double for her nudity scenes but the actress has been nude in the film “Elizabeth” and a television show “Bordertown.”