The steamy photos of Rumer Willis, the daughter of Bruce Willis and Demi Moore, in a naked photo shoot has appeared on the Internet. 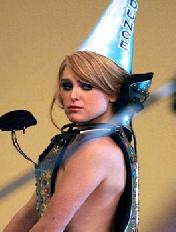 She revealed that the pictures were taken from upcoming comedy House Bunny, explaining, “That picture was taken from a photo shoot we did for the movie for a calendar in the film that shows (the sorority girls) going too far. Somebody happened to take a picture and leak it. It is what it is.”

The 18-year-old daughter of Bruce Willis appeared in a photo from the mock calendar shoot wearing nothing but a dunce cap and silver back brace.