Suri Cruise, the daughter of the celebrity couple Tom Cruise and Katie Holmes, will reportedly become a star, after she was signed on to be the new face of Baby Gap. 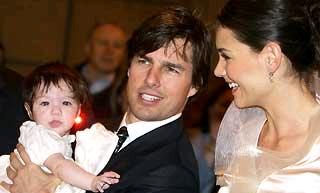 The celebrity couple was reportedly offered a very lucrative modeling contract by the clothing giant, to have their toddler front an upcoming campaign.

If the reports are true, then the little girl, who hasn’t even reached her second birthday as yet, will be appearing in billboards for the company soon.

Also, this will be the second time Suri will pose for the cameras, her first photo shoot was in October 2006 issue of Vanity Fair with her parents.