Rihanna was spotted in three different looks while performing at the Brit Awards 2011 on February 15. 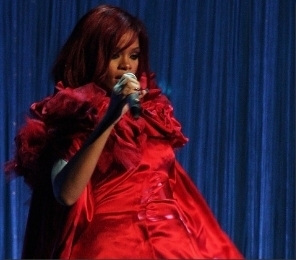 The 22-year-old singer hit the stage with “Only Girl (In the World)” before singing “S&M” and “What’s My Name.” She stripped down to a black corset after arriving on stage in a red dress.