Twilight hunk Robert Pattinson’s abs are fake, it has been claimed. Both Robert and co-star Taylor Lautner have spent a lot of time shirtless showing of their muscles and for Pattinson it was all about the abs. 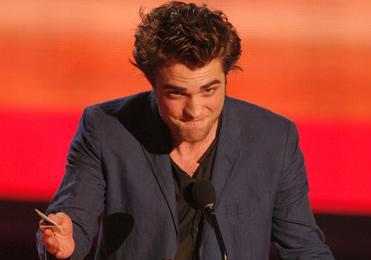 Fans cheered the first topless’ photos from the man that plays Edward Cullen in Twilight and the New Moon movie. But is the toned mid-section a hoax?

Sources say the pin-up uses sophisticated make-up and lightning tricks to create a six-pack. But in truth, the British-born actor can’t stand working out, say insiders who worked with him on the Italian set of the latest Twilight flick, New Moon.

An insider source from the set of the movie is talking with the celebrity weekly magazines and is claiming that once robert would finish a scene with the rock hard abs he would duck away for a touch up on his stomach.

A source said: “He had a team of make-up artists working on his stomach to make it appear as if he had a six-pack. “They used all their tricks – including liquid body paint, shading and airbrushing – to make his torso look toned.”