Robert Pattinson was spotted while sharing a kiss with Taylor Lautner during the 2011 MTV Movie Awards on June 5 in Universal City, California. 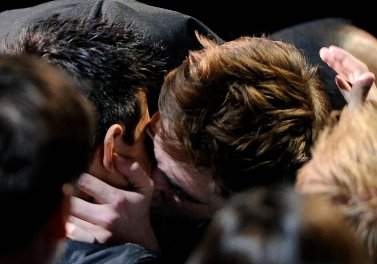 When the British actor won “Best Kiss” with Kristen Stewart, he decided to run into the audience and kissed Taylor, who was nominated in the same category. Taylor revealed that Robert kissed him all over. Meanwhile, Robert also won for Best Male Performance and Best Fight with Bryce Dallas Howard and Xavier Samuel.