Robert Pattinson and Emilie de Ravin continue filming on the set of their new film “Remember Me” in New York City on Tuesday (July 14). 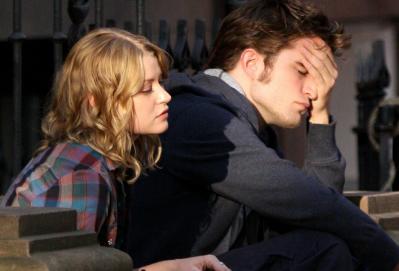 The 23-year-old actor, who was being sweet on set with his co-star Emilie de Ravin, has been mobbed by fans around the film set so often that producers are reportedly trying to lock down the entire set and no longer list Pattinson on the daily call sheet.

The producers also recently held a meeting with the Remember Me crew where they were given explicit rules about how to deal with questions about Rob by either the media or the Twilight hunk’s fan. “They were told not to talk to the press at all,” one insider reveals. “And when they talk on their phones about the shoot, they need to make sure no one else is around. They’ve also started listing these rules on the top of call sheets.”

To ward off some overeager R-Pattz watchers, crewmembers often lie about what’s being shot, telling onlookers that it’s for a commercial or an episode of Law & Order.

“It’s ridiculous,” one crewmember said. “I worked on a film with Jennifer Aniston and it wasn’t nearly this bad. Older people don’t even know who he is. It’s all the teenagers that literally scream when they see him who make shooting impossible. They’ve had to hire security, it’s actually the same company Aniston used.”