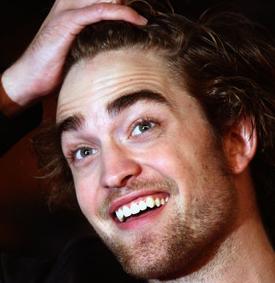 What’s a girl fashion trend that confuses you? He answered: “Ugg boots!”

Who would play you in the movie version of your life? He admitted: “I’d play it because I probably won’t be employed after this.”

What’s your dream job? He responded: “Being a pianist.”

If you could trade places with anyone in the world for one day, who would it be? He answered: “Someone who has lots of respect or power. George Bush, possibly.”

Who in your family are you closest to? He replied: “My dog, Patty.”

What’s the fast food you can’t live without? He shared: “I like all fast food, but my favorite is probably In-N-Out Burger.”

What’s your worst habit? He admitted: “Speaking too much.”

What’s the last song you listened to on your iPod? He said: “I don’t remember the exact song, but it was something James Brown from the Black Caesar sound track.”

What’s the last thing you bought? He revealed: “Toilet paper.”

What did you dream about last night? He continued: “Kristen [Stewart].”

How much money is in your wallet right now? He shared: “Thousands of dollars.”