Robert Pattinson maintain the scruffiness on his face while leaving Pearson International Airport in Toronto on September 29. 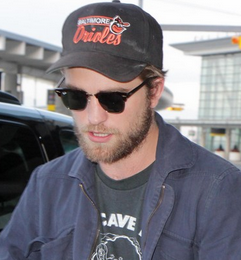 The “Twilight” star arrived in town a few days before to do some post production work for the movie, Cosmopolis. Aside from “Cosmopolis,” fans could catch Robert in “Bel Ami.” It is a chronicle of a young man’s rise to power in Paris through his manipulation of the city’s most influential and wealthy women.