Salma Hayek, who recently wore a t-shirt showing “Stylish, Sexy, Pregnant”, was certainly lived up to her glamorous reputation as she attended the ALMA awards in California last Friday. 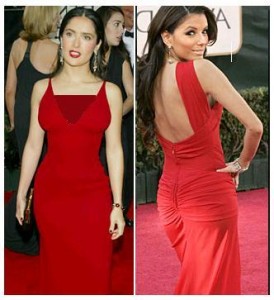 The beautiful actress, whose baby is due this summer, was at the bash – which honors achievements by Hispanic artists – to pick up the outstanding television series gong for her show “Ugly Betty”. The program won four awards, including best actress for its star America Ferrera, and best supporting actress for her on-screen sibling Ana Ortiz.

The actress had plenty to talk about with the evening’s host, Eva Longoria, who like her is engaged to a Frenchman. No date has yet been released for the nuptials, but Salma Hayek is set to tie the knot with businessman Francois-Henri Pinault.

Eva Longoria, on the other hand, is to walk down the aisle with Belgium-born, France-raised basketball player Tony Parker on July 7 in Paris. The gala turned out to be a hard night’s work for the Desperate Housewives beauty, who changed an incredible 18 times during the event and even performed a red-hot salsa dance with co-host Mario Lopez.