Guests motored to the restored La Fenice theater in Venice Saturday as Salma Hayek and Francois-Henri Pinault tied the knot – for the second time. 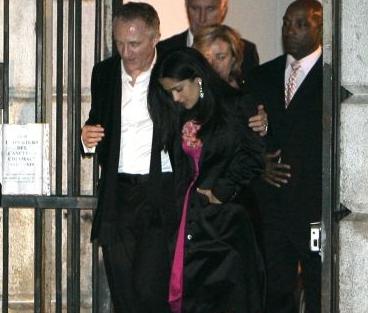 Hayek and Pinault originally were married in a small civil ceremony in Paris last Valentine’s Day.

This time, the couple made it a weekend-long celebration, starting with a cocktail party at Punta della Dogana, an art museum owned by the groom’s father, Francois Pinault.

Among those attending were actresses Charlize Theron, Penelope Cruz and Ashley Judd, plus U2 frontman Bono and Vogue editor Anna Wintour, as well as former French President Jacques Chirac.

According to People Hayek “wore a Balenciaga wedding gown by Nicholas Ghesquiere”:

The bride, who wore her hair in a bun with a long veil, held a bouquet of orchids and stephanotis with crystals.

The couple’s daughter, Valentina Paloma, 19 months, was a flower girl, along with Francois-Henri’s son and daughter from his first marriage, Francois, 10 and Mathilde, 8. Valentina wore a dress by Bonpoint for the ceremony, which started around 7 p.m. At one point in the ceremony, the guests sang “Over the Rainbow.”