Burly bodyguard Mickey Brett has tangled with some tough customers, but none so tough as his former clients Brad Pitt and Angelina Jolie. 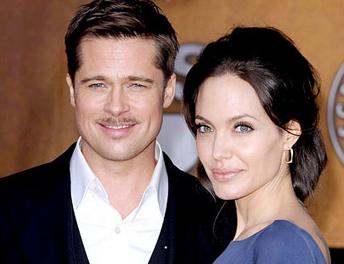 Once they entrusted their lives, and those of their children, to Brett. But now that they’ve learned he’s been thinking about revealing their intimacies in a book, the star couple has come down on him with the fury of “Mr. and Mrs. Smith.”

Pitt and Jolie, who played married assassins in that movie, have recruited some of the most fearsome libel attorneys in the U.S. and the U.K. to make sure Brett’s lips stay zipped.

A proposal for a memoir and a TV show, both offering Brett’s first-person account of his years guarding the likes of Sandra Bullock,
Tom Cruise, Nicole Kidman, Sly Stallone and Richard Gere.

The main focus of the pitches, though, was Brangelina. Suffice it to say that Brett had fond memories of Jolie, whom he had been protecting since 2001, and less fond recollections of Pitt.

Seeking comment from them, we received a bracing phone call from Marty Singer, the couple’s American litigator.

Singer alleged that Brett wasn’t a reliable source. In fact, he was a “pathological liar.” He said Brett’s lies to U.S. Immigration officials here had led to his being barred from entering this country. Singer said that only recently did Pitt and Jolie discover that Brett, who’d claimed he was a British SAS commando, never even served in the military.

Singer noted that in 1993 Brett was questioned in the murder of British tycoon Donald Urquhart, though he was later released. In 2006, Brett was arrested for assaulting a restaurant owner in Namibia. The same year, in India, he was accused of choking a photographer and arrested for roughing up and making racial insults against some parents who were trying to pick
up their kids.

All told, Singer said, Brett had been convicted 11 times of various crimes. Pitt and Jolie had repeatedly come to Brett’s defense. But they apparently came to have doubts about his style of problem-solving.

As for his book and TV proposals, Singer said Brett was bound by a confidentiality agreement. According to Singer, Brett has now stated that he’d never signed off on the pitches and that many of the yarns attributed to him were fabricated by his ghost writer.

Brett’s attorneys told us: “Our client disputes what has apparently been said by Mr. Singer, but is not in a position to comment further at this stage.”

Brett’s ghost writer, Robin McGibbon, insists that he did not embellish the bodyguard’s stories.

“Mickey was definitely going to consider a book or TV deal if the offer was good enough,” says McGibbon. But at this point, he said, “there’s not going to be any book.”