“The Curious Case of Benjamin Button,” is the movie based on the short story by F. Scott Fitzgerald. The film includes Cate Blanchett, Tilda Swinton and Brad’s daughter Shiloh.

Shiloh, who is the biological daughter of Brad Pitt and Angelina Jolie and who will turn one this coming May 27, has a cameo role playing Cate as a baby in the movie. 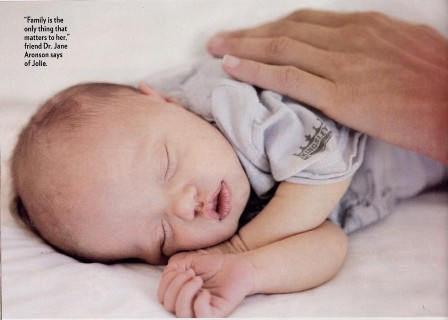 A source revealed, “Brad and Shiloh saved the day when twin sisters hired to take turns playing Cate Blanchett’s character as a baby wouldn’t settle down. Everyone waited in vain while the babies were fed, changed and hugged – but nothing worked to calm them on the set in New Orleans.” A source added, “Then Brad realized his daughter’s happy and mellow disposition made her a quick fix for the role.”

Shiloh, who had been playing at the on set day care center, was quickly put in costume.

As for Shiloh’s acting performance, the source also revealed, “She’s a natural. Shiloh did her scenes perfectly and was giggling and happy throughout her big day.”