Taylor Swift is the cover girl of Your Prom magazine for its Spring 2009 issue as she opened up to the magazine about song-writing, first kiss and the man she’d love to go to prom with. 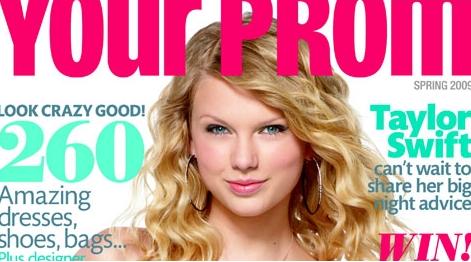 The country singer, who is the former girlfriend of Joe Jonas of the Jonas Brothers, revealed that her dream date for the prom is “Gossip Girl” hunk Chace Crawford.

The 19-year-old singer also revealed that she had her first kiss at 15, saying: “I was 15 and the oldest out of all my friends to have not kissed a guy.”

On her advice for those who will attend prom, she shared: “Be a social butterfly. Don’t just hang with your boyfriend. Save the slow dances for him, but dance with everyone. And don’t let petty prom drama ruin the evening.”

On her pet peeve, she answered: “People who believe their own hype.”

But now the country singer uses her relationships as songwriting inspiration as she admitted: “I like to write about boys and relationships.”

When not working, she loves to unwind by “turning off all the lights in the house, lighting candles and listening to sad songs while conducting random baking experiments.”

In the new issue of Your Prom mag, on stands New Year’s Eve, December 30, Taylor also reveals about her own prom secrets. The country singer added that she is “addicted to prom.”