Taylor Swift posted the first official photo from the Fourth of July bash at her house in Rhode Island. 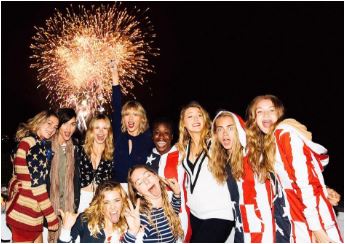 The country crooner posed with her friends with the fireworks in the background. Her friends include Cara Delevingne, Gigi Hadid, Blake Lively, Uzo Aduba, Halston Sage, Este Haim, Rachel Platten, and Ruby Rose with girlfriend Harley Gusman. She greeted happy 4th on Instagram. All of the friends are decked out in patriotic apparel. Meanwhile, Taylor spent so much time with her boyfriend Tom Hiddleston at the beach on Sunday. A ton of celebrities were also with them at her New England.