Pippa Middleton caught the attention with her geometric print dress while heading to her seat in the Royal Box at Wimbledon. 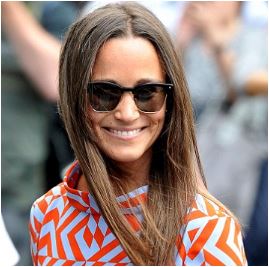 The brunette beauty matched her grey and red patterned outfit with grey suede heels and clutch bag. She was visiting the SW19 for the second time this tournament. She decided to go to Wimbledon to surface in the social scene after a few weeks of having a low profile. Although Pippa did not come along with boyfriend James Matthews, she joined other VIPs, which included Anna Wintour, to watch Roger Federer in action from the Royal Box.