Teri Hatcher, who plays the role of Susan Mayer in the TV series, showed off her sense of style for an American fashion house. She has signed on to appear in the fall ad campaign of the fashion house, taking over from the Olsen twins who fronted the brand last season. 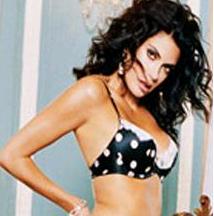 The star of “Desperate Housewives” has assignment for Badgley Mischka. The actress can be seen donning everything from swimwear and sportswear in the print campaign of the Badgley Mischka Couture collection.

The fashion house had turned up with two trailers of clothes for the 42-year-old actress to choose from for the photo shoot in California. The actress revealed that she was very excited about her new venture, saying, “Working with Mark and James has been a wonderful experience, there is such a great synergy between us. They were the first designers to dress me for my first-ever red carpet event.”