Tom Cruise is flaunting his sexy rock star chest in this new photo from the set of Rock of Ages. 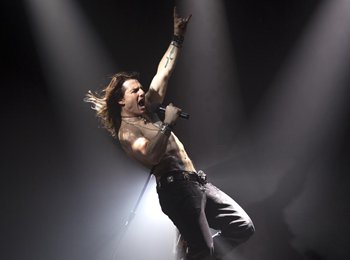 In the film, the actor sings Bon Jovi’s hit song “Wanted Dead or Alive.” He portrayed the womanizing rocker Stacee Jaxx while starring opposite Russell Brand, Alec Baldwin, Mary J. Blige, Julianne Hough and Diego Boneta. His director Adam Shankman tweeted the photo of Cruise as the first look of the actor as the rocker in the first day of shooting.