Tom Cruise , who fails to assassinate Adolf Hitler in his new movie “Valkyrie,” revealed he grew up really wanting to kill the Nazi leader. 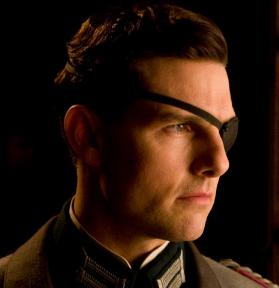 In the World War Two thriller based on a true story of the unsuccessful attempt by German soldiers to kill Hitler, Cruise plays Colonel Claus Von Stauffenberg who plants a briefcase bomb under a table at Hitler’s military headquarters.

A heavy wooden table saves Hitler and Stauffenberg is executed with his co-conspirators.

The Hollywood star of such major blockbusters as “Top Gun” and “Mission Impossible,” said to the press during a visit to Seoul to promote his latest film: “I always wanted to kill Hitler, I hated him.”

He continued: “As a child studying history and looking at documents, I wondered, why didn’t someone stand up and try to stop it? When I read the script, it was entertaining and informative to know what the challenges were and what it was like to be in the environment.”

Stauffenberg’s legacy helped ease the burden of guilt about World War Two and the Holocaust Germans still endure. But Germans had balked at the prospect of Cruise playing Stauffenberg as they objected to the actor’s ties to Scientology, the movement founded in the 1950s by science fiction writer L. Ron Hubbard.

Germany, which does not recognize Scientology as a religion and regards it as a cult, made it difficult for the crew to film in the Bendlerblock building and courtyard where Stauffenberg was shot dead.

Tom Cruise added: “I’ve never heard of this story before… It turned out to be an incredible adventure, just to be there and shoot at these locations that Stauffenberg was. It was a very powerful experience and hopefully it will communicate with the audience. It has certainly influenced my life, just knowing that there were people who tried to stop him (Hitler).”

Valkyrie, directed by Bryan Singer, opened in the United States on December 25 and fared better than skeptics had predicted, reaching No. 4 in the North American box office ratings for the three-day weekend starting December 26. It opens on January 22 in Seoul for the first time in Asia.