Amidst mounting rumors of her splitting up from singer boyfriend Nick Lachey, Vanessa Minnillo reportedly has been seen getting cozy with a new man on Wednesday night, April 15. 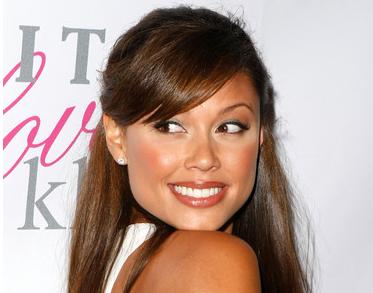 Vanessa Minnillo reportedly has had enough of her singer boyfriend Nick Lachey and was seen flirting with another man during the Armani Exchange watch launch party at the SLS Hotel on Wednesday night, April 15. “Vanessa was sitting on this dude’s lap for a long, long time. It didn’t seem like they were just friends,” an onlooker tells X17 Online. “They were playfully flirting all night and Nick was nowhere in sight.”

Vanessa Minnillo and Nick Lachey have repeatedly been hit with break-up rumors since they began dating in 2006. Both of them have issued numerous denials though, insisting everything is well with their romance.

As of press time, there has yet obvious evidence of X17 Online’s claim of Vanessa cheating on Nick with an unidentified man. Vanessa herself, who attended the star-studded affair wearing a black dress/white jacket combo, also has not yet commented on the report.