Duchess Kate is expected to welcome her third royal child at St. Mary’s Hospital in central London any day now. 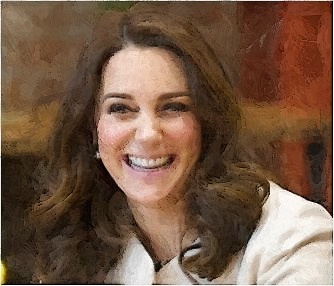 The Duchess of Cambridge reportedly has a hospital bag, which is filled with things that are prepared when the special moment happens. According to the royal sources, the brunette beauty has the 19th-century alabaster cameo pendant from Queen Elizabeth II and black onyx beads from mother, Carole. She also receives her favorite Madagascan vanilla aromatherapy candle and a CD of “calming music” from her husband, Prince William and a few of their favorite stuffed animals from her kids, Prince George and Princess Charlotte. A source explains that the royal kids want their mother to have something to cuddle. She won’t forget to bring a few family photos, including one of her parents, for her bedside table at the hospital. And she also brings her Kindle, which includes her favorite books. Meanwhile, Duchess Kate would have a long maternity leave from her public duties after the new royal baby is born. The baby is due mere weeks before the royal family’s other big event, the wedding of Prince Harry to Meghan Markle on May 19th.