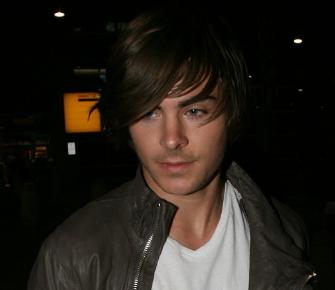 On the reason why, he explained: it is because “I kind of value in people not knowing where I am or what I’m doing.”

Having his big screen movie “17 Again” to be released in U.S. theaters next Friday, April 17, Zac Efron was photographed attending the comedy flick junket over the weekend. The comedy film teams him up with the likes of Matthew Perry, Leslie Mann, and Michelle Trachtenberg just to name some.

Meanwhile, Zac Efron and girlfriend Vanessa Hudgens lounge around the pool with Lance Bass during this behind-the-scenes shot for FunnyOrDie.com.

17 Again producer Adam Shankman tells People a bit about the comedy sketch. He shared, “It’s very, very silly. It’s Zac Efron’s nightmare pool party where Tom Lennon and Nicole Sullivan, who are also in 17 Again play his white trash uncle and aunt and come and just humiliate him in front of a hip, young Hollywood crowd and they offend literally everybody in sight.”