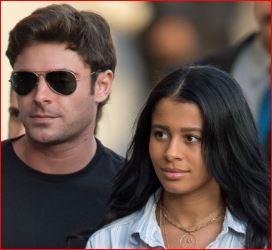 The “High School Musical” star erases all photos of the 28-year-old model on his Instagram account. This incident triggers the rumors, which suggest that they split. Now, the rumor is confirmed by a source. There is no information about the break-up or its reason. Meanwhile, Zac is currently shooting for “Baywatch” film on the East Coast and he’ll soon start doing promo work for his film, “Neighbors 2.” Sami attended Coachella without the actor earlier in the month.