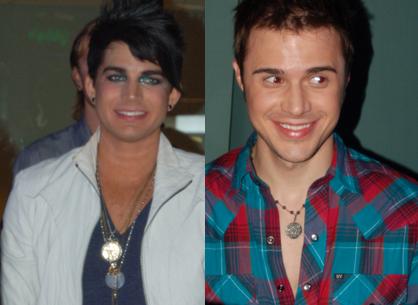 They were taking part in the American Idol Live show, which was being held at the venue.

Idol runner-up Lambert, 27, recently revealed what the world can expect from his upcoming debut (official) album. “It’s really about finding the sound that I want to communicate my ideas to people,” he said. “On Idol, you’re doing cover music that’s tried and true material. I went the route of doing a lot of classic rock because I knew that that was the more vocal and it was songs that everybody connected with. In creating new material, I want to do something modern that will stand the test of time, and something that’s new. I’m being careful not to stay stuck in that sound, because it could end up being dated. So, I’m going to try to take the best musically from that era and make it mix with modern pop electronic production. It should be really different.”

Idol winner Allen is also gearing up to release an album. “As exciting as the last few months have been, I’m really looking forward to what is next,” he recently said. “I’m very grateful to be working with Simon Fuller and his team at 19 Entertainment, along with Barry Weiss and Jive Records on my debut album.”

“Everyone’s been asking me what it’s going to sound like,” he went on. “It will be very similar to what you heard from me on the show — definitely in the pop/rock genre. I can’t wait to get started!”