With the back and sides shaved, but still maintaining a mop on top, it gives Rihanna versatility when it comes to deciding how to wear her hair. 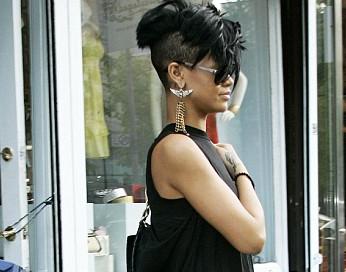 The Barbados-born star proved this yesterday as she gave her locks an uplift, styling them into a kind of Mohican-inspired updo.

Earlier this month she showed off a far more sleek do, wearing her tresses in a slanted undercut as she celebrated Independence Day in Las Vegas at the Tao nightclub.

The Umbrella singer dressed in jeans and a sleeveless black sheer top as she headed out in the Big Apple yesterday.

She teamed her look with a pair of drop earrings and chain-strapped black handbag.

Rihanna was playing the girl-about-town and nipped to the opticians after having dined at Italian eatery Da Silvano in the city’s 6th Avenue.

It has been a tumultuous year for Rihanna, whose former boyfriend Chris Brown was last month given a community service order and probation after pleading guilty to assaulting her.

Rihanna’s father Ronald Fenty recently hit out at the sentence, saying: “He should be in jail. Chris should have been sent to jail for what he did to my girl. He’s got off lightly. Chris put her through hell.”