There are a few more choice quotes from Rolling Stone’s story “Wild Idol: The Psychedelic Transformation and Sexual Liberation of Adam Lambert,” on newsstands now. 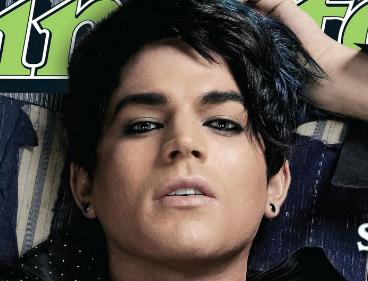 On experiencing discrimination: A few years ago, I did a musical with Val Kilmer, The Ten Commandments at the Kodak Theatre in Los Angeles. I was finally personally awakened, wearing nail-polish, feeling attractive and comfortable in my own skin for the first time. We’d go out sometimes with Val, and it was the first time I’d ever been around a celebrity — it felt really fabulous. One night, we hung out at his house and Sean Lennon came over to jam with us. I was like, John Lennon’s son? This is the coolest thing I’ve done in my life. But I had a lot of problems with the people putting on the show. One day, the director pulled me aside and said, “Can you turn it down? The producers are a little uncomfortable. It’s a little too … gay.” I was like, “Um, are we doing a musical here? I’m sorry, there are fags all over the place, dude.” It was very upsetting.

On making his sexuality public: There are so many old-fashioned ways of looking at things, and if we want to be a progressive society, we have to start thinking in a different way. There’s the old industry idea that you should just make sexuality a non-issue, just say your private life’s your private life, and not talk about it. But that’s bullshit, because private lives don’t exist anymore for celebrities: they just don’t. I don’t want to be looking over my shoulder all the time, thinking I have to hide, being scared of being found out, putting on a front, having a beard, going down the red carpet with some chick who is posing as my girlfriend. That’s not cool, that’s not being a rock star. I can’t do that.