Twilight star Robert Pattinson may be one of the most — if not the most — sought-after actor by both photographers and fans, but that doesn’t mean the 23-year-old hunk is going to hide out behind the gates of some walled-in compound. 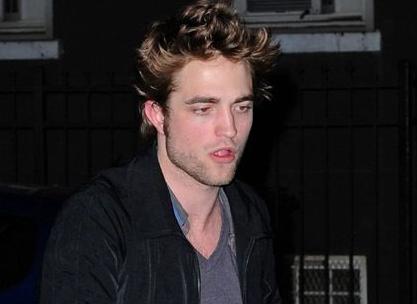 In fact, R-Patts loves hanging out with his friends — and he isn’t going to let stardom stop him.

Around 11:15pm on Wednesday night, Robert and a group of pals, including good friend, actor Tom Sturridge, his Twilight mom Elizabeth Reaser and actress Eva Mendes, were all enjoying themselves at NYC’s Bowery Bar, throwing back a few Peroni beers and nibbling on pizza between trips outside to enjoy an occasional smoke. These four were also joined by three others, a blonde woman and two guy friends.

Despite partying with the sexy Twilight star, one witness tells OK! that Eva appeared to have her eyes set on Sturridge. “They were chatting non-stop and laughing the whole time,” says the source.

Rob, dressed in a black hoodie and matching hat, got up from his table on the bar’s patio several times to take some phone calls. According to another partier, he spent a good deal of the night chatting with Elizabeth, who celebrates her 34th birthday on June 15.

One insider at the bar overheard Rob joking to the blonde woman in their group that having a British accent gets you points with American girls — yeah, because being the super-hot star of a wildly popular movie franchise doesn’t get you anywhere…

Just before 1am, it was time for Eva to make her exit. “She hugged and kissed everyone goodbye and left,” says one bargoer.

The rest of the group lingered for another 30 minutes, finally leaving around 1:30am.
“As they were walking out, the girls were joking that they’ll pretend to be Rob’s publicist if people were outside,” one insider tells OK!.

Lucky for him, there was only one photographer waiting outside, so he was able to slip into a cab by himself without having to fight off a throng of paparazzi.