Some set photos allegedly from the cover shoot for Adam Lambert’s album have leaked. 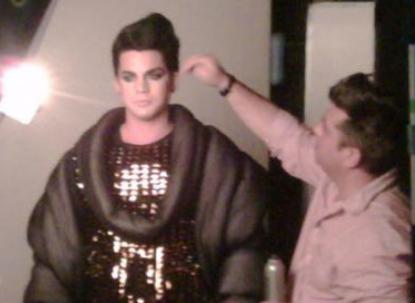 One of the leaked pictures include this one in which Lambert appears to be wearing a glittery Hefty bag and sporting a hair-do that takes its cues from Bob’s Big Boy.

The cover is reportedly being shot by Warwick Saint and other elements of the shoot included Swarovski crystal eye pieces, lots of leather and spikes.

Meanwhile, Adam Lambert talked about his upcoming album with Rolling Stone and asked fans to please stop throwing their whips, handcuffs, and underwear at his face.