Aerosmith singer Steve Tyler has reportedly broken his shoulder after falling off the stage during a concert. 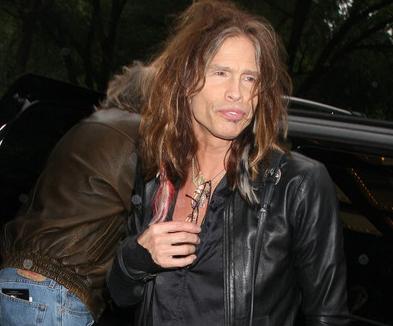 Tyler, 61, also received stitches in his head and back following the accident in South Dakota, according to a Twitter message sent by Billie Perry, the wife of Aerosmith guitarist Joe Perry.

“Yes he is very sore,” she wrote, adding that there was no word yet on when the tour would resume.

Tyler fell while entertaining the crowd by dancing around after the sound system failed during the song Love In an Elevator, concertgoer Lance Yellow Robe told the Rapid City Journal.

Tyler was on the stage’s catwalk when he tottered backward and fell, Yellow Robe said. Security rushed to help him and the crowd cheered when Tyler got back up.

Tyler was taken backstage and around 12:15 am, Aerosmith guitarist Joe Perry came out to tell the audience Tyler was being taken to the hospital and that the show would not go on.

Rod Brandhagen, Rapid City Regional Hospital coordinator, initially said that Tyler was on his way there early on Thursday. He later declined to give any additional details.

The incident is the latest in a string of bad luck to hit Aerosmith. The band was forced last month to postpone seven shows after Tyler hurt his leg muscle.

During the 1970s and early 1980s, Aerosmith were renowned for rock’n’roll excess. Tyler, the father of Hollywood actress Liv Tyler, entered rehab in 1986 and has been clean ever since.

He has previously checked himself into rehab because his feet hurt. In one of the more unusual celebrity explanations for a stay in a treatment centre, the star said he needed time to recuperate following a bout of painful foot surgery caused by his energetic stage routines.