Victoria Beckham was on hand Friday for the first round of “American Idol” auditions in the post-Paula Abdul era. 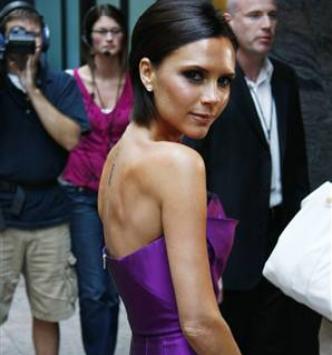 The former Spice Girl arrived at a downtown Denver hotel where call-back auditions were being held as scores of onlookers crowded against rope barriers, many snapping photos.

Fox, which airs the popular singing show, said Beckham and Katy Perry would be guest judges in Abdul’s place. But it wasn’t immediately clear whether Beckham did any judging Friday, and “Idol” spokeswoman Alex Gillespie declined to say what her role was. Perry was nowhere to be seen.
Story continues below ↓advertisement | your ad here

Judge Kara DioGuardi arrived in a limo wearing a black dress, telling local Fox affiliate KDVR that she was wearing black to mourn Abdul’s absence. DioGuardi called Abdul her mentor and the heart of the show.

“She was very kind, she showed me the ropes, so I have to give her the props for that,” DioGuardi said. “I hope she is happy and I hope she reconsiders.

Abdul announced this week she was leaving “Idol” after eight seasons. She would not discuss details about her “Idol” exit Thursday in a phone interview, nor would she address whether the door was still open for a return.

Lilly Scott, a contestant at the Denver auditions, told KDVR-TV in Denver that the show was “kind of lame” without Abdul. “I was really excited, but three is still good,” she said.

Beckham and host Ryan Seacrest were the first to arrive at the Denver hotel Friday. Seacrest chatted with fans and posed for pictures. He grabbed the cell phone of a woman who was taking video of him, aimed at her for a few seconds, then shook her hand and returned the phone.

Randy Jackson and Simon Cowell arrived last, and the crowd grew boisterous, some chanting “We love you Simon!”

“Why don’t you call me anymore?” he teased one woman. “I thought we were friends.”

One fan shouted, “I love how mean you are.”

Melinda Doolittle, an “Idol” fan favorite who finished third in the show’s sixth season, said on her blog Friday that Abdul’s departure made her “incredibly sad.”

Each judge has a role, Doolittle wrote, “But Paula … sweet Paula, is the heart … the artist … the mama … the one who understands what you’re going through and empathizes with you.”