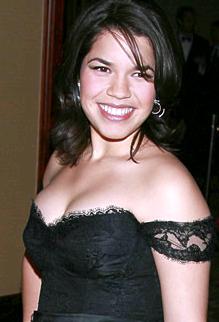 The “Ugly Betty” actress insisted that she is more deserving of praise for her genuinely shapely figure than the two slender screen beauties.

She revealed, “There’s just way too much attention placed on the way we look. I think it’s hilarious when people call Jessica Alba or Eva Longoria curvy. Come on – they’re not curvy. I’m curvy!”

She continued, “I’ve been really lucky. Playing Betty has prepared me to be exactly who I am and not to change. What is normal now? Is it normal to be size zero? Starving yourself is not beautiful.”

As for her playing the dowdy-looking Betty, she loves playing it since her role means she doesn’t have to constantly worry about her appearance. She added, “If I’ve gained a pound or lost a pound, or have food in my teeth, it all works for the show!”

She also admits she does occasionally obsess over her appearance, but loves food to go on a diet to lose weight, saying, “There are times when I go to the gym and really try, and there are times when I just don’t. Even if I wanted to be anorexic, I just don’t have what it takes. After four hours of being anorexic, I’d be like, ‘It has been four whole hours. Feed me!'”