Danny Gokey is dancing off “American Idol,” leaving showy Adam Lambert and twangy Kris Allen to duke it out in the finale of the popular Fox singing competition next week. 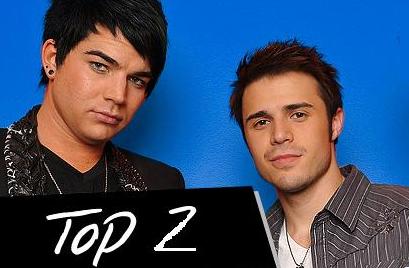 Gokey, the bespectacled 29-year-old church music director and recent widower from Milwaukee, was revealed to have received the fewest viewer votes on Wednesday.

Gokey had continually impressed the judges with his husky voice _ but not his hip shaking _ throughout the contest. “Idol” judge Simon Cowell called his cover of Joe Cocker’s version of “You Are So Beautiful” on Tuesday a “vocal master class” but said his dancing during Terence Trent D’Arby’s “Dance Little Sister” was “desperate.”

Along with Lambert, Gokey had long been considered to be a front-runner of the eighth season, never appearing as one of the show’s bottom vote-getters. “Idol” host Ryan Seacrest said more than 88 million votes were received with 1 million votes separating the top two singers, meaning next week’s Lambert-Allen showdown may be closer than anticipated.

“Look, none of us would have predicted this, guys,” Cowell said at the end of the show.

The episode kicked off with “Night at the Museum: Battle of the Smithsonian” stars Ben Stiller, Hank Azaria, Bill Hader and Jonah Hill starring in a plug masquerading as a skit about the “Idol” judges’ desk being inducted into the Smithsonian. It wasn’t a joke. The perch will be on display at the Smithsonian Institution Building in the coming weeks.

Before the results viewers saw Alicia Keys urging fans to support her charity, a 15-year-old Rwandan rapper named Noah, sixth-season champ Jordin Sparks, videos of the final three singers’ trips to their hometowns and an over-the-top performance by Katy Perry.

Gokey just wanted to cut to the chase.

“I think we’ve had enough suspense, enough commercials, just enough playing around,” he said. “Let’s just get to it.”

“I want to see Katy Perry!” Lambert exclaimed in response.

The feeling was apparently mutual. Perry made her love for Lambert no secret. The “I Kissed a Girl” singer crooned her latest single, “Waking Up in Vegas,” with a troupe of glittery showgirls while wearing a scantily clad Elvis-inspired ensemble that was initially covered in a cape emblazoned with Lambert’s name.

Either Lambert, a 27-year-old theater actor from San Diego, or Allen, a 23-year-old college student from Conway, Ark., will be crowned “Idol” next Wednesday. Cowell said Allen’s totally stripped-down version of Kanye West’s “Heartless” on Tuesday made him a contender for the finale.

After the broadcast, a coin toss determined the order of performances for next week’s finale. Kris won the toss — and Adam will sing first.