Jessica Sierra, who got into a lot of trouble from her arrest and alleged explicit tape, was invited from performing in concert, according to the organizer of a concert billed as a holiday tribute to U.S. troops. 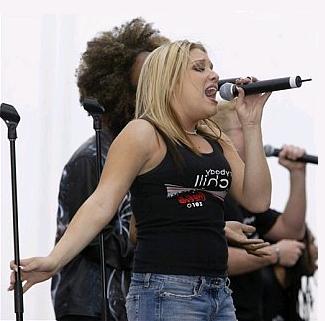 But even if the singer wanted to sing at the event Friday in Washington, she couldn’t. The 22-year-old singer is being held without bail at the Hillsborough County jail in Tampa on charges of disorderly intoxication and resisting arrest. She is set to remain there at least until her next hearing, scheduled Dec. 20.

Buzz Patterson, a Retired Air Force Lt. Col., said in a statement, “While we appreciate Ms. Sierra’s past efforts to support U.S. troops, including performing for them in Iraq on Independence Day, it is quite obvious that Ms. Sierra needs to devote a great deal of time to putting her life back together.”

Buz Patterson added patrons of MoveAmericaForward.org, which is coordinating the concert, were concerned about Sierra’s participation in the event.