American Idol’s top finalists hit the road July 1 as they heads to Brooke White’s hometown of Glendale, Arizona, the first stop which will make over 50 stops across the country this summer. 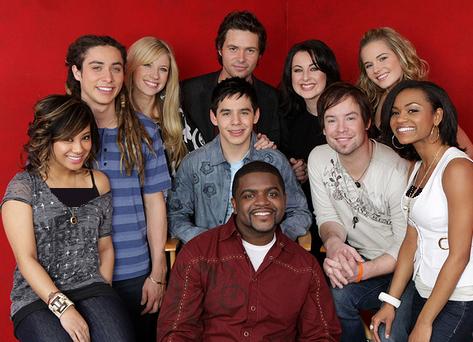 On her life on the road, David Cook revealed, “So far so good. We’re getting our feet wet a little bit and the crowds have been amazing!”

David Archuleta said, “It’s been great at every city [so far] and so much fun … to watch other people perform and see how [the audiences] react to them.”

The [American] Idols will travel from show to show on luxury buses (one for the women and one for the men) equipped with Internet, TV, food, music, and beds.

Brooke White, who has trouble sleeping on the bus, revealed, “When we’re on the bus, we’re asleep or eating a bowl of Lucky Charms.”

Michael Johns, who thinks there’s more to do than snooze and eat cereal, explaining, “In the front half of the bus, if we want to wind down after the show, watch TV or just have a beer or do whatever, that’s fine. Then there’s a middle section where everyone sleeps, and then there’s a back section if you ever want to work on the computers or read books.”

Syesha Mercado, who took advantage of the computers, saying, “I just love writing about the experience. That kind of helps me pass time.”

She also revealed, “The bus life is nice. It’s kind of like sharing a larger room with each other. You get used to it pretty quick … Everyone is respectful of each other.”

The trip brought them the American Idol Top 10 finalist closer together, Carly Smithson said, “We’re all really supportive because it’s kind of hard for our beloved other ones to understand what we’re going through. Our husbands are trying to understand but it’s hard. You can’t call them all day, and then when you get time you want to save your voice.”

Michael Johns, who sees his wife as much as possible, saying, “She’s coming tonight and she went to Phoenix. She’s going to go to New York and Miami and Dallas. The touch of a woman is never too far away.”

On their tour is on Sept. 13 in Tulsa, Okla., which still seems like a long ways off, he added, “We’ve only been on the bus for like three or four nights so far but now we’re going out for a month straight. After a week, we’re all going to be a little bit crazy to be honest.”

David Cook, who found out on tour that he’s a snorer, is staying focused. He added, “It’s a learning experience to try and make [the concert] as intimate for the person in the back row as it is for the person in the front row. [It’s] the biggest thing I’ve tried to grasp. So, hopefully when I get home to [my hometown of] Kansas City [in August] to play, we’ll have that all mapped out.”