Isis King, the first transgender contestant on America’s Next Top Model, was living in a homeless shelter when she learned about a photo shoot during last season of the CW reality show. 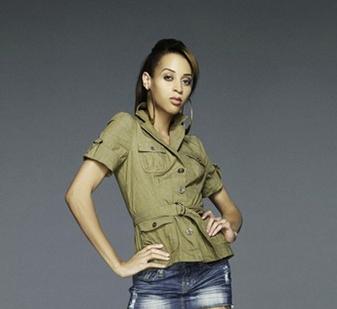 The transgender model, who 22-year-old former receptionist from Prince George’s County, said: “I don’t necessarily know if America or the world is ready.”

The 22-year-old model revealed: “I did the shoot, gave it my all, and the rest is history. They liked me. I really tried to shine because I told myself, you never know what can come from this opportunity.”

Isis King explains: “I pulled Mr. Jay [Manuel, the art director] to the side and said, ‘If I wanted to come back and try out for the show, have you ever had a girl who was born in the wrong body?’ And he said, ‘I guess they haven’t put that much into it.'”

The single Maryland native identifies herself as a woman born physically male, adding: “I don’t necessarily know if America or the world is ready for a transgender top model. But this is who I am. I couldn’t control it.”

For more details about the interview with Isis, in which she talks about coming to terms with her body, telling her family and her model competitors and how far along she is in the transition, grab the latest issue of US magazine.

Meanwhile, Isis King revealed in a promotional interview: “I think I bring a lot to this competition that might give me an advantage over the other girls. I have the drive. I’ve given up everything to be here,” Isis says. “And this is my dream so because of that I’m starting from scratch and saying ‘I really want this.’ If these girls can do it, I know I can do it.”

The inclusion of Isis is hailed by GLAAD president Neil Giuliano as “an unprecedented opportunity for a community that is underrepresented on television. America’s Next Top Model Cycle 11 premieres on The CW Network September 3.