The pop legend Michael Jackson is reportedly dating Pamela Anderson. Are they going to be an odd couple? 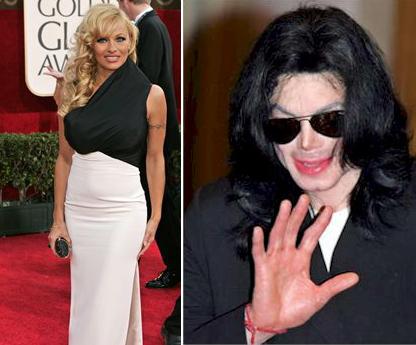 According to a report, the 50-year-old “Thriller” singer has met the 41-year-old former “Baywatch” babe for two dates in Malibu, California.

A source dishes the scoop, saying: “It was all arranged by their people in total secrecy, very cloak and dagger. Michael is such a private person. He gets nervous when he thinks people are following him around, so he chose somewhere neutral for their first date.”

The source revealed: “They arrived separately at the Shutters Hotel on Malibu beach so no one would suspect anything and then had a few drinks at the bar.”

Michael Jackson and Pamela Anderson hid away in a corner of the bar for privacy, and they looked to be enjoying each other’s company.

The source added: “They were very friendly. Pamela was being her usual flirty self and Michael seemed to be responding. They are such a strange couple but they seemed to really hit it off.”

The celebrity pair got on so well on their first date, they have met up again already, going for a coffee at the Country Mart in Malibu.

Both Pamela Anderson and Jackson have been unlucky with their previous marriages. Michael Jackson has been married twice, to Lisa-Marie Presley and nurse Deborah Jean Rowe. Pamela
Anderson has tied the knot three times, to Motley Crue rocker Tommy Lee, Paris Hilton’s ex Rick Salomon and Kid Rock. None of Michael or Pammie’s marriages lasted more than three years.