A magazine cover photo of Angelina Jolie breast-feeding one of her newborn twins may have turned the superstar actress into a role model for new mothers. 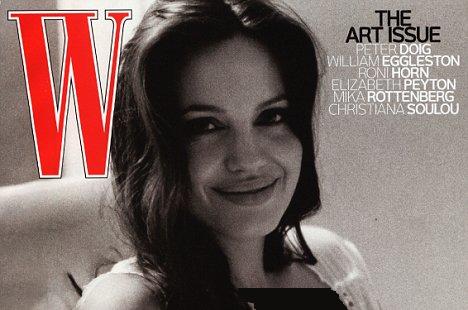 The photo, taken by Jolie’s partner Brad Pitt, will graces the cover of W magazine for its November issue , which you could see here. Other family pictures taken by Pitt in the weeks after the birth in July of twins Vivienne Marcheline and Leon Knox will appear inside.

Andi Silverman, who is a mother of two and author of “Mama Knows Breast,” revealed: “I think it is fabulous. Seeing a celebrity like Angelina Jolie breast-feed can be a role model to encourage women to make a choice that is wonderful for their baby.”

She added: “Breasts are used to sell all sorts of products, so to see them used the way nature intended can only be a great thing.” .

Although the breast-feeding support groups and moms celebrated Angelina Jolie’s public statement, one expert thought that the picture appeared to be voyeurism, especially given Angelina Jolie’s sex symbol status in movies like “Wanted” and “Lara Croft: Tomb Raider.”

About 70 percent of American mothers breast-feed their newborns but the rate falls dramatically after six months, according to official figures.

The 33-year-old actress is not the first celebrity to be photographed nursing her baby. Model Jerry Hall appeared on the pages of Vanity Fair in 1991 breast-feeding Gabriel, her son with Mick Jagger.

But that was a generation ago, and Jolie’s global influence as a style-setter and through her humanitarian travels and support of kids in third world countries, ensured the impact of the photo of her special moments with her baby.

Dr. Shannon Fox, who is a psychotherapist, declared: “The response from moms we have seen is that if someone as popular, beautiful and together as Angelina is breast-feeding her children, it inspires other women to do so themselves.”

In the picture, little is seen of the act of breast-feeding. It shows Angelina Jolie smiling, while a tiny hand is just visible at bottom of the frame.

In the interview, Angelina Jolie admits that seeing Brad with adopted children Maddox and Zahara, changed her view: “I knew that he would never see them as different, and that gave me a certain peace. I suppose I just looked at him and loved him and just felt open to [getting pregnant]. I suddenly wanted to. It’s one of those things you can’t explain. I’m with a man who’s evolved enough to look at my body and see it as more beautiful, because of the journey it has taken and what it has created. He genuinely sees it that way. So I genuinely feel even sexier.”

But the cover photo of breastfeeding sends a second message. According to Fox, “The problem is that she is also an international sex symbol. So whether or not she says ‘This is a beautiful way of nurturing my baby’, every man who sees that photo will see those breasts as sexual.”

La Leche League International, which is the world’s oldest breast-feeding support organization, revealed the photo was particularly welcome as Angelina Jolie has twins.

Jane Krouse, who is La Leche League International spokeswoman, revealed: “Mothers of twins report it takes a lot of time, effort and physical energy to breast-feed. I think the picture is beautiful.”