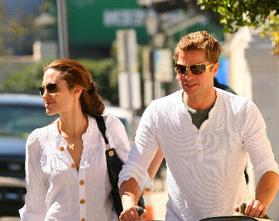 Maddox, who was adopted from Cambodia, began his classes at the Lycee Francais de New York on the Upper East Side last Tuesday.

He celebrity couple accompanied the six-year-old child to the Manhattan campus, where lessons are all taught in French and based on France’s curriculum, for his first day.

A source revealed, “They were just like normal parents.”

The couple, together with kids, is currently residing at Angelina’s Upper West Side condo.