Brad Pitt, who is on film set in New Orleans, was joined by Angelina Jolie and kids Maddox, Pax, Zahara, Shiloh, Knox and Vivienne for a family outing on Sunday to VertiMarte Deli. 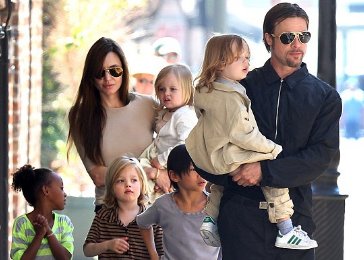 A source revealed that the whole Jolie-Pitt brood came in and got some juice and chips and stuff like that for the kids. They would like to get out and walk around on a pretty day like today.

As for spending time in New Orleans, Brad is currently in the midst of filming the Andrew Dominik directed mob movie “Cogan’s Trade” alongside Ray Liotta and Sam Rockwell.