Angelina Jolie was spotted while carrying her daughter Vivienne after arriving at the airport on March 18 in New Orleans, Louisiana. 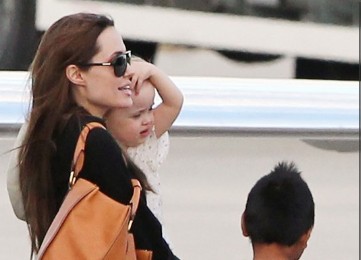 The “Tomb Raider” star was wearing stylish all-black outfit of jeans and a sweater along with a tan designer bag for traveling. She flew through a private jet with her other kids Maddox, Zahara, Pax, Shiloh, and Vivienne’s twin brother Knox.

Angelina and her brood of six travelled to New Orleans, where Brad Pitt has been working on his new film Cogan’s Trade for two weeks