Angelina Jolie, who was wearing a Ralph Lauren little black dress that flaunted her legs, attended the launch of the Kung Fu Panda DVD and the premiere of its companion adventure story, Secrets of the Furious Five. 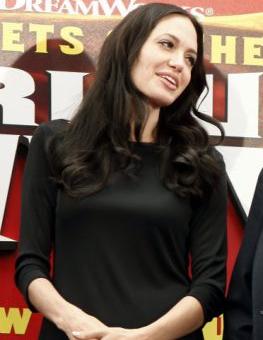 The 33-year-old actress, who was present at the event held at the Chinese Theater in Hollywood, California, praised Brad Pitt as she revealed: “I have a great partner. He’s the best daddy and we have fun, so whenever it gets hard we can just look at each other and find a way to laugh about and just appreciate that they’re only little once, and we should enjoy every minute.”

On adding to the brood, she said: “Anything could happen. We’re open to anything, we love kids and we’re having a great time… It’s chaos in our house, but it’s so much fun. We’ll definitely have more.”

On her twins, she shared: “They are starting to get very smiley, and they are at those months where their personalities really start to shine.”

On the twins having different personalities, she replied: “They do, but they are still so little.”

On their favorite family activity, she laughed and declared: “Go see Kung Fu Panda. No, we do lots of things. We like to stay home and be together, be normal, play.”