After spending hours filming a daring stunt on top of a speeding truck most people would be ready to call it a day. 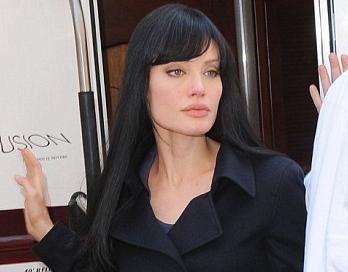 But mother-of-six Angelina Jolie headed straight to make-up for a complete transformation.

Wearing a backpack with her newly-dyed blonde hair tucked under her hat, the 33-year-old was joined by various stuntmen as she worked to perfect the scene throughout the morning.

But after her dangerous work-out Angelina looked more like her usual self as she donned a brunette wig.

With her pale lipstick and blue trench coat she looked an image of refined beauty in comparison to the earlier bedraggled scenes.

The dare-devil actress was filming in Albany, New York State, for her upcoming thriller, Salt.

Salt sees the mother-of-six play CIA officer Evelyn Salt on a mission to clear her name after she is accused of being a Russian sleeper agent.

Meanwhile, Angelina Jolie performed a series of high-speed stunts on top of a truck while filming her forthcoming movie, Salt.

There have been claims the actress, 33, was left exhausted by a new diet and she was also seen with a cut knee on the set in New York earlier in the making of the film.

Sources close to the production expressed concern that she “could injure herself due to the weight loss” and called into question her insistence on personally performing action scenes.

However she does not appear to have been discouraged and seemed happy to throw herself about on the top of the lorry – secured by safety wires – in the latest shoot on Interstate 787 in Albany, New York State.

In the film, she plays an officer in the Central Intelligence Agency, called Evelyn Salt, who is accused of being a Russian ‘sleeper’ spy and caught up in an alleged plot to assassinate the US president.

The role was originally going to be played by Tom Cruise, but the part was re-written as a woman to enable Jolie to take the role.

The film, which is being made by Columbia Pictures, is due to be released next year.

Jolie’s partner Brad Pitt, 45, and their children have moved from Los Angeles to New York so they can be together during the production.