Brad Pitt and Angelina Jolie are often reported that their relationship on the rocks. It seems they truly seemed happy when they first came to Chicago. However, there is a change by their second week in Chicago, which triggered for some to think there may be some truth to the rumors. 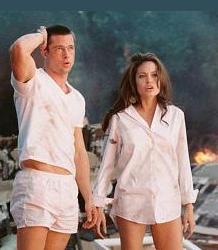 According to the sources, the celebrity couple has been fighting a lot. They have been arguing about the kids, her weight and other life decisions. Some of the sources even say that they have already broken up and when they do spend time together it’s for their children.
A report claims that Angelina Jolie sobbingly begged Brad Pitt to stay with her in a desperate bid to save their relationship. According to a magazine, she begged, “I need help. Please don’t leave me!”

Friends revealed that the actress fears that she was losing the “Babel” actor so she begged him to stay and to help her shoulder the burden of raising four children and managing a hectic career. An insider revealed, “She knows she can’t do it on her own. With everything that’s going on in her life with her kids, her charity work and her career, she needs Brad by her side.”