Angelina Jolie, who made a tearful tribute to her mother, might be a supermom but she admitted that she struggled with breast feeding her twins at the same time. 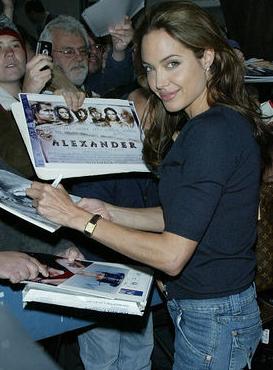 The “Challenging” star confessed on Britain’s morning show GMTV: “It’s very hard. I stopped at three months, [it was] about as much as I could do.”

The 33-year-old actress, who was in London promoting her film “The Changeling” with her partner Brad Pitt in tow and their four-month-old twins, Knox Léon and Vivienne Marcheline, said she even resorted to manuals on the subject.

She revealed: “There’s this football hold – it’s a lot harder than it looks in the books. I did that a few times. I would take turns. It just takes a long time.”

The mom of six also revealed that it was while filming “The Changeling” that she became pregnant with the twins: “We decided to start trying in the beginning, and by the end I was.”

In the film, Angelina Jolie played a mother whose son goes missing, based on a true story.

On whether marriage is important, Jolie says categorically “it’s not” – explaining: “we jumped into being a family first. And that just seems like the biggest commitment you can possibly make. It doesn’t feel like anything’s lacking.”